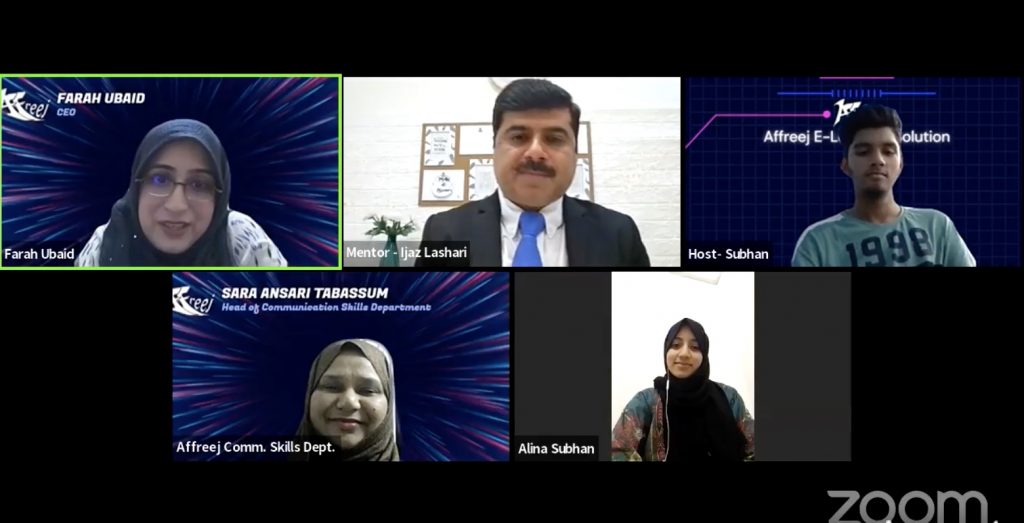 On Saturday, 19/2/22, the 3rd season of Techno Show was conducted, being part of a series of live-streamed events involving young, creative minds constructing programs to show to the world and to showcase what they’re truly capable of. This season was hosted by Subhan Farooq & Alina Subhan with the opening ceremony led by AFFREEJ CEO Ms. Farah Ubaid. The Sponsors of the Techno Show were: Talaash, SY Management Consultancy, & Watch. Eat. Drive. Repeat. The mentors for the event were imminent educators, Ms. Maha Ejaz Faizan & Mr. Ijaz Lashari.

Throughout the event, the mentors gave their opinions & suggestions for every participant as well as for the entirety of the Techno show. Head of Comm. Skills Dept. Ms. Sara T. Ansari also gave her opinions & words of encouragement for all the participants, & for those who helped in making the 3rd season of Techno Show possible. Lastly, the participants shared their opinions of the event & a group photo was taken shortly after.

In general, the third season of AFFREEJ’s Techno Show was a great success, gaining hundreds of viewers on Facebook, with the event going smoothly & with each role-player giving it their best. Due to the positive feedback & success, the Techno Show will continue to take place more frequently & consistently.