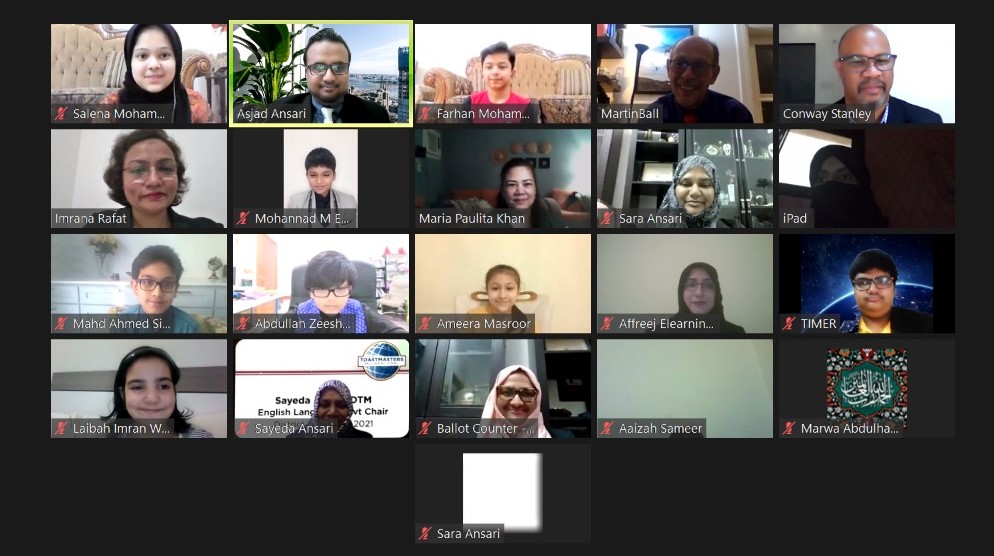 On Saturday, the 20th of March 2021, Affreej e-learning Solutions organized their first ever virtual cross-continent public speaking event, the Talking Titans – Face It, Ace It Challenge! It was an event to remember. There were nine very- spirited contestants, based in three international time zones. They were aged 09 to 14 years and had had varying degrees of exposure to the idea of public speaking.

The event was made possible by a team of organizers and roleplayers, who worked diligently, to make it happen. To aid the “challenge” aspect, was a panel of seven international judges, with diverse experiences. Common denominators between these judges were a solid background in education and a passion for youth development.

The event kick-started with the host, Mr. Asjad Ansari welcoming everyone to the event. Then, the Organizer, Ms. Farah Ubaid and our Training & Mentoring Specialist, Ms. Sara Ansari jointly declared the event open. Inspirational messages were immediately exchanged, and this led to the commencement of the Contest proper. Contestants took to the virtual stage one by one, and shared some aspect from their own, personal lives. In line with the pre-event training that they had acquired as part of Affreej efforts, the speakers ensured that each of their speeches had a good structure and a personal story that was in line with their intended purpose. The time allocated to the speakers was between three and five minutes, and this time was duly recorded by Mr. Abubakr Syed, who also displayed the same very promptly, via green, amber and red color card signals.

The first place was bagged by Master Mohanned Mohammad Ikram, while the second and third places were taken by Ameera Masroor and Laibah Imran respectively.

The joy was further compounded by the fact that the event, which was also broadcast on Facebook, was well supported by parents and community members alike.

All in all, a great time was witnessed, and the contenders, roleplayers, and audiences found it very rewarding. With the stage set, Affreej E-learning Solutions friends and family now look forward to see Talking Titans as a regular feature on the Affreej calendar.